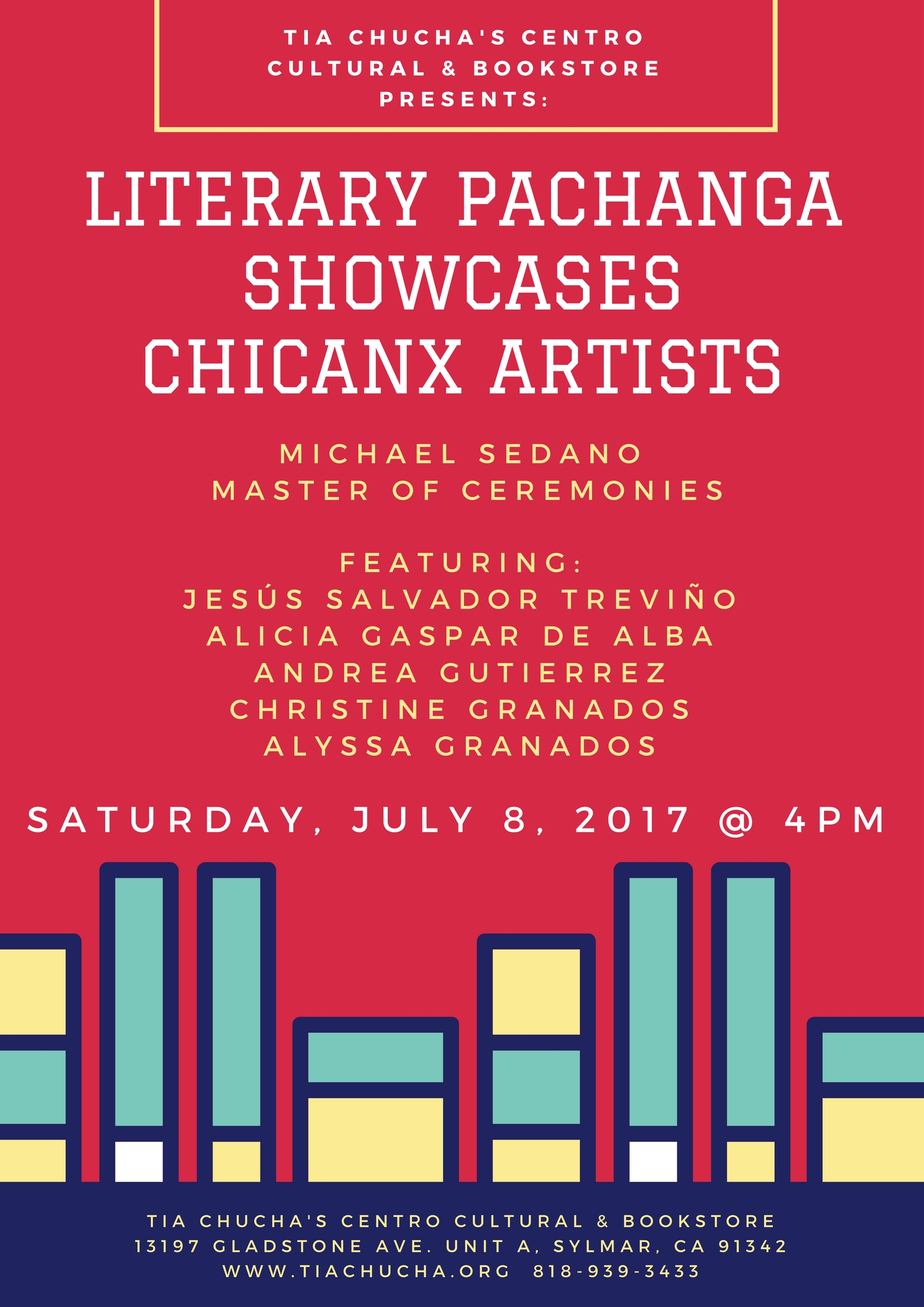 Tia Chucha’s Centro Cultural & Bookstore will host a menagerie of artists to celebrate Mexican American Literature with a Literary Pachanga for the community.

Jesús Salvador Treviño is writer/director whose television directing credits include Criminal Minds, Law & Order Criminal Intent and many others. He has written, directed and produced several PBS documentaries about Latinos. Trevino’s latest effort is a video website showcasing Latino history, art, music, theater, literature, cinema and food: www.Latinopia.com He will read from his most recent collection of short stories Return to Arroyo Grande which was published in 2015 and won the 2016 American Book Award.

Alicia Gaspar de Alba, a native of the El Paso/Juárez border has published 11 books, among them award-winning novels and collections of poetry and short fiction. Since 1994, she has been a professor of Chicana/o Studies, English, and Gender Studies at UCLA, and is currently Chair of the LGBTQ Studies program. She will read from Calligraphy of the Witch published by St. Martin’s Press in 2007, released in paperback by Arte Público Press in 2012.

Andrea Gutierrez is a writer, editor, and educator in Los Angeles. Her work has been published or produced in make/shift, Mujeres de Maiz, Bitch, Huizache, and the Chicanas, Cholas, y Chisme theater festival in Los Angeles. She is on the editorial staff at make/shift magazine, previously brandished her red pen at Drunken Boat and Los Angeles Review of Books, and has served as a judge for the International Latino Book Awards. Andrea is a VONA/Voices writer and received her MFA in creative writing at the University of California, Riverside. She will read from her works published in Huizache Magazine.

Christine Granados has been a Spur Award finalist and received Sandra Cisneros’ literary prize the Alfredo Cisneros del Moral Foundation Award in 2006 for her first book of fiction Brides and Sinners in El Chuco, published by the University of Arizona Press and her stories have been in many anthologies. She will read from and discuss her second book, a novella and short stories about strong Mexican American women who live along the border, titled Fight Like a Man and Other Stories We Tell Our Children.

Alyssa Granados’ diverse catalog of guitar styles come from a range of influences spanning from folk to dub. She is half of the Electronic Funk duo Dreamers Paradise out of Boise, ID.